The Benson family is that of my mother.  The family lived locally in the Aughton and Ormskirk areas of Lancashire for many years.  Their occupations included gardeners and silk weavers.  If you have a Benson from this area, why not contact me to see if we have a link. 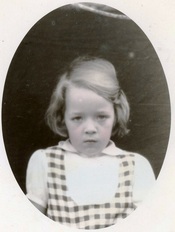 Mum as a child. Cute!
May Benson was born in 1927, daughter of William Benson and Myrtle Benedicta Trafford.  She was their eldest child and had a younger brother, Alan who was born in 1930.  May was born in Aughton in Lancashire.  She may have lived in different houses but she never lived anywhere but the village (except a few months in Lydiate when she first married Dad).  She went to primary school at the local village school and her secondary education was in Maghull.  May left school and trained as a shorthand typist.  And her job was based on that throughout her working life.  I am sure if May was born today she would have been a candidate for university.  May met Ron as part of a group of friends and their romance blossomed while Ron was overseas serving his National Service.  They married in 1952 at St Michael's Church in Aughton.  I was born in 1954 and my brother, Michael in 1959.

When first married May and Ron lived in Lydiate with Ron's dad but then they got a council flat in Aughton and that is where I lived for the first five years of my life.  After Michael was born we moved to a council house on the same estate as the flat.  May lived there until her death.

May was keen on knitting and made all sorts of garments for us.  She wasn't as keen on sewing but did make the majority my childhood dresses.  Holidays were spent in North Wales with odd couple of years in Scotland.  May never has a passport and never travelled overseas.  She had no desire to go any further than she did and as she grew older she went out less and less.  After Ron died she rarely left the house and was lost without him.  Although it was sad to lose May in 2010 we knew that she was then at peace with Ron. 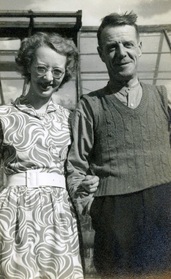 William, with my Mum probably around 1950.
William was a gardener.  I was only 13 when he died but remember the times spent with him fondly.  I spent a lot of time at my grandparent's house as a child and remember waiting for him to come home from work.  He worked in the gardens at Ormskirk Hospital.  I remember being told a story that I always waited for him at the end of the road to come home from work.  One day he arrived home to find car crashed in the spot where I waited.  I can imagine what went through his mind but for some reason I hadn't gone to meet him that day and was safe at the house.  I was told never to wait in that place again.

My grandad was a great storyteller and would make up great stories about our adventures on the way to the blackpudding factory sailing over the custard lake and going through the rhubarb forest.  Funny what you remember! 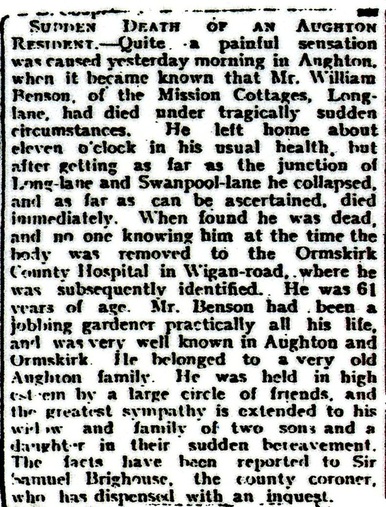 William was born and died in the village of Aughton, which is on the outskirts of Ormskirk, Lancashire.  He married Louisa Beesley in 1896 in the parish church in Ormskirk,  William's occupations included gardener and a worker on the railway.  My grandfather, William was the eldest of the three children of William and Louisa.

The report to the left told of the sudden death of William when he collapsed in the street.