For the full Gatward family tree, please email me with your name and the name of your father and then I can send you the correct link to find your ancestors in my online tree - so please contact me. 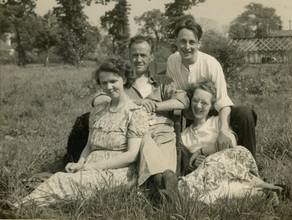 Dad was born in Bootle in 1929, the son of Charles Edmund Gatward and Evelyn Gladys Roe.  In his teens Dad lived in Lydiate and he when he went to serve his National Service he asked May to write to him as a friend.  I have the letters that Dad sent to Mum and you can see how friendship turned to romance and they married in 1952.  Dad worked as a fitter and as far as I remember had a number of different jobs when I was a child.  But in 1965 he started working for Pilkington's Glass R&D division.  Dad spent the rest of his working life at Pilkingtons.  He started as a fitter but I remember that Pilkingtons had a suggestion scheme where employees were encouraged to submit suggestions and received a financial reward.  Dad submitted a lot of suggestions and received various amounts of money that got bigger and bigger.  At that point Pilkingtons gave up and gave him a job in R&D!  They must have thought it cheaper than paying for all his suggestions.  In his spare time Dad was a keen gardener and our front garden regularly won an award in the local best kept garden competition.  He was also a keen DIYer and could turn his hand to anything.  A very practical man.  Dad was diagnosed with bladder cancer in July 2006 and died 3 months later.  I still miss him.

The picture shows Dad as a young man in the early 1950's with Mum, his Dad Charles and step-mother Lilian. 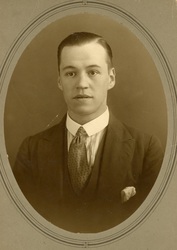 My grandfather, Charles Edmund Gatward, was one of 7 children, 2 died leaving my grandfather as the only boy to carry the name forward. He married Evelyn in 1928. They had three children, the eldest being my Dad. The three children were in isolation hospital for about three months in 1940 with suspected diptheria. Unfortunately, the youngest sister, Corene, died at the age of 8 in October 1940. Evelyn took the death of her youngest child very hard and herself died in 1941. This left Charles with two young children and he found it difficult to cope and the childen had to spend sometime living in North Wales with relatives.

Go forward 10 years and Charles met his second wide, Lilian, and Dad met Mum. Both couples married in the Spring on 1952. Mum and Dad were together for 53 years until Dad died. Charles spent 15 years with Lilian up to his death.

Charles as a young man is pictured her.  My memories of Charles are as my "nother Gaga" (my Mum's dad being Gaga and he was another Gaga!).  I remember he grew carnations and showed the flowers at shows.  I just remember tiny little elastic bands around the buds for some reason - fascinating to play with.  Or maybe I shouldn't have done that!

Edmond William Gatward was my great grandfather. He was born in Saffron Walden in Essex in 1863 and was one of 7 children to Edmund Gatward and Barbara Ann Lawrence. The family moved from Saffron Walden to North Wales between 1861 and 1871. In 1871 Lawrence was living with his family in Bangor and by 1881 had moved to the West Derby area of Liverpool and was working as an apprentice hairdresser.

He moved around and in 1891 was in Holywell working as a hairdresser. By 1901 he was back in the Liverpool area of Liverpool with his wife Ellen and their daughter Maude.

But I couldn't trace the marriage of Edmond and Ellen nor the birth of their daughter Maude. So like all hurdles in the family tree you give up and go back later. I did eventually find a marriage - in 1932!  They lived together as man and wife, had 7 children but didn't marry for all those years.

Maude too was confusing because her name was Barbara (on her marriage certificate) but she was called Maude. I have never traced her birth certificate under either name. Or maybe as Ellen wasn't married her birth was registered in her mother's maiden name but that was Williams and I can't find that name either. A mystery!