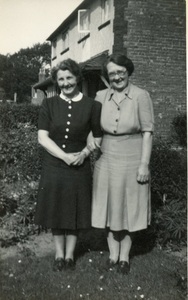 My grandmother (right) with her sister Lily
Myrtle Bendicta was known as May all her life.  She was the eldest daughter to Mary Ellen Trafford and was born in 1900.  Mary Ellen has three children out of wedlock although this was never discussed when my grandmother was alive.  I remember my grandmother well and spent a lot of time with her as a child.  She worked making curtains and loose covers for people in the area and I would often go with her to the big houses when she measured up and later fitted the curtains or covers.  I inherited her love of sewing and although do not make as much now, I did a lot of dressmaking in years gone by.

Nana (as I called her) would bake cakes and make bread and I would love to help out, something that I still enjoy.  Nana was born in Ormskirk but would have moved to Skelmersdale when her mother married when she was 11 years old.  She stayed there until her marriage to William Benson, marrying in St Paul Church, Skelmersdale.  She then lived in Aughton the rest of her life.

At the age of 18 Mary Ellen who was unmarried at the time gave birth to her first child.  She has her second child (Lilly Irena) four years later - still unmarried.  Then a third child (Reginald)  followed in 1907.  Recently I have discovered a will where Reg is named as a beneficiary by Edward Moorcroft of Ormskirk and we assume that this is his father.

After having three children, Mary Ellen married John Horrocks in 1912 and went on to have four more children. The youngest, Leslie, was killed in action in WW2. 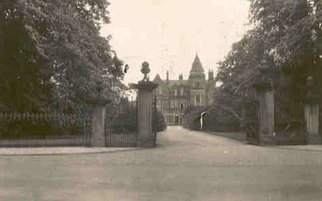 Croston Hall situated in Grape Lane, was home to the de Trafford family.
Richard was the eldest of 8 children born to Henry Trafford and Elizabeth Banister.  All the children were born in Croston Lancashire.  Richard married Mary Almond in 1864 and at some pint between 1871 and 1881 William, Mary and their children moved to Ormskirk.   Unfortunately, Mary died in 1888 when he youngest daughter, Mary Ellen was only 8 years old.


Richard came from Croston where also lived members of the de Trafford baronetcy.  Detailsof the de Trafford family can be seen at The Trafford Family website but unfortunately I can't link my Traffords to this family.  But they did live in the same village - so who knows!